I just read this paper that is submitted to ICRL 2017 and thought that I might write my notes as a post in the blog. It is a quite interesting and useful habit to publish these notes, but I have been a little lazy before. I'll try to publish more from now on.

It is an extension of the encoder-decoder framework for the task of question answering, which has two levels of attention when encoding sentences of the story and also when encoding the words of each sentence. Although "attention" term is used throughout the paper, "importance weighting" would better convey the idea of the paper. In addition to this, the other novelty of the paper is introducing a feedback mechanism for when the model doesn't have enough information to generate a correct answer. To test their model's ability to ask question from a user and obtain feedback, they also introduce a new dataset based on bAbI, named "ibAbI".

Let's start by first looking at this figure from the paper. 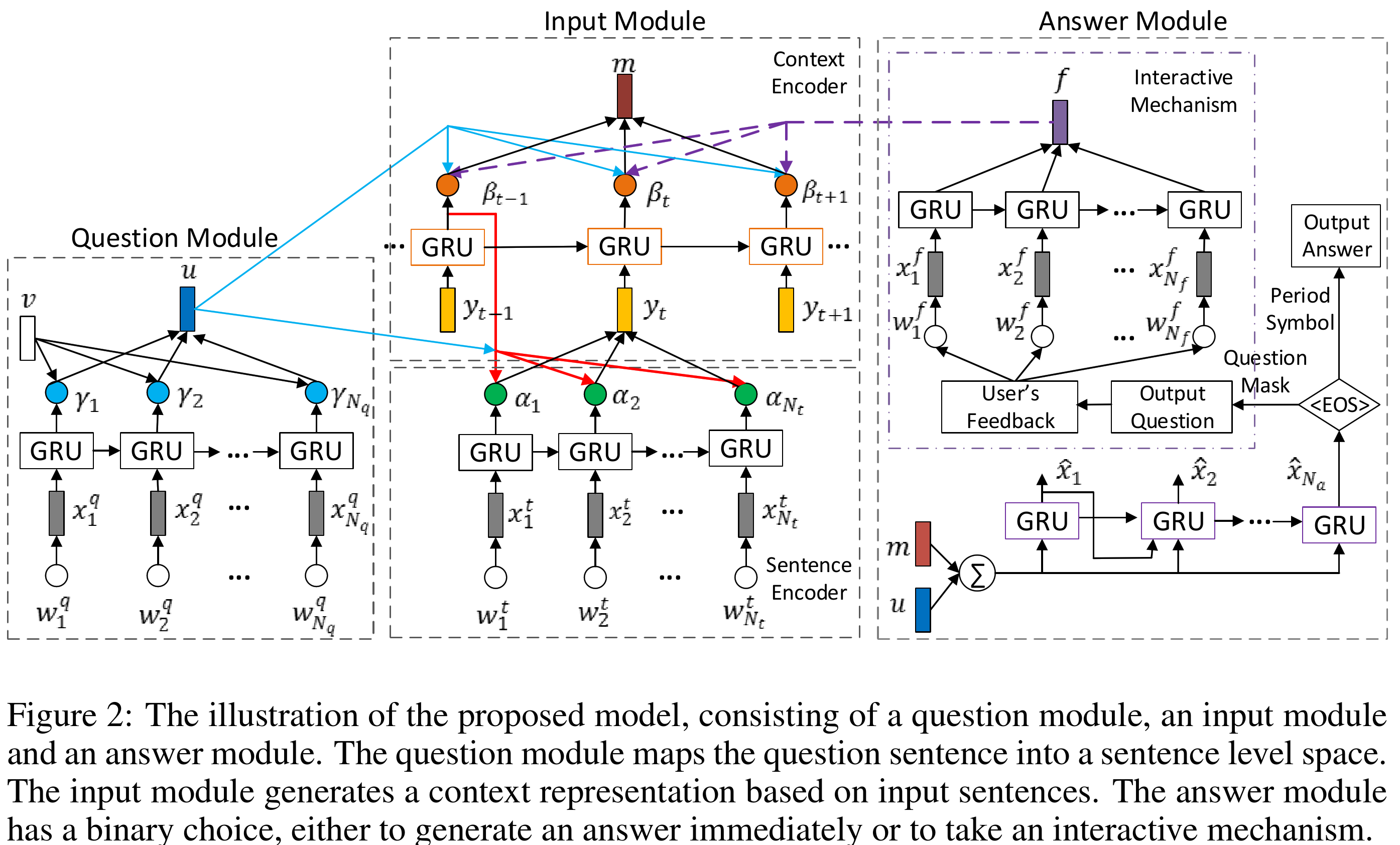 Given a question sentence as a sequence of words, $(\omega^q _ 1,\cdots,\omega _ {N _ q}^q)$, each word is first embedded using an embedding matrix \(\boldsymbol{W} _ \omega\). To achieve an encoding which takes the sequential nature of this sentence into account, a \(GRU _ \omega\) is used. Usually the last hidden state of the recurrent model is used as the encoding of a sequence. However, in this work, they use importance weighting (or "attention") to obtain the encoding of the sequence, using hidden states of the GRU throughout the sequence. To determine the importance of the hidden state at each time step, its similarity with a vector \(\mathbf{v}\) is used. This vector is learned jointly with the model. Although in general it doesn't look like a good idea to use a static vector to assess the importance of each word in a question sentence, however in this case, given mostly short questions, it seems to work. A better approach would be to use techniques like coattention, i.e. to use representation from the input sentences to assess the importance of words in the question sentence. In addition, it would be much better if results without this static attention were also reported, to show how much, if any, is this approach beneficial to the overall system. Anyways, after normalizing the "attention" weights using softmax, weighted some of hidden states is calculated and using a one-layer linear MLP, is projected into "context-level" vector space, thus

So we have vector $\mathbf{u}$ as the vector representation of the question sentence.

"Input module aims at generating a representation for input sentences, including a sentence encoder and a context encoder". Input module is given a number of sentences each containing $N _ t$ words. Sentence encoder will encode each sentence into a vector representation, and then the context encoder will encode the sequence of sentence embeddings into a sequence of contextual embeddings, embeddings that take context into account. Let's start from the sentence encoder. As usual each word is embedded first using the embedding matrix $\boldsymbol{W} _ \omega$ (embedding matrices are shared in all modules). Then using a GRU, $GRU _ \omega$, these embeddings are transformed into a sequence of hidden states, $(\mathbf{h} ^ t _ 1, \cdots, \mathbf{h} ^ t _ {N _ t}).$ After this, the important step of word-level attention occurs. What is important and one of the main novelties of this work, is that contextual information from previous sentences is used in this step. 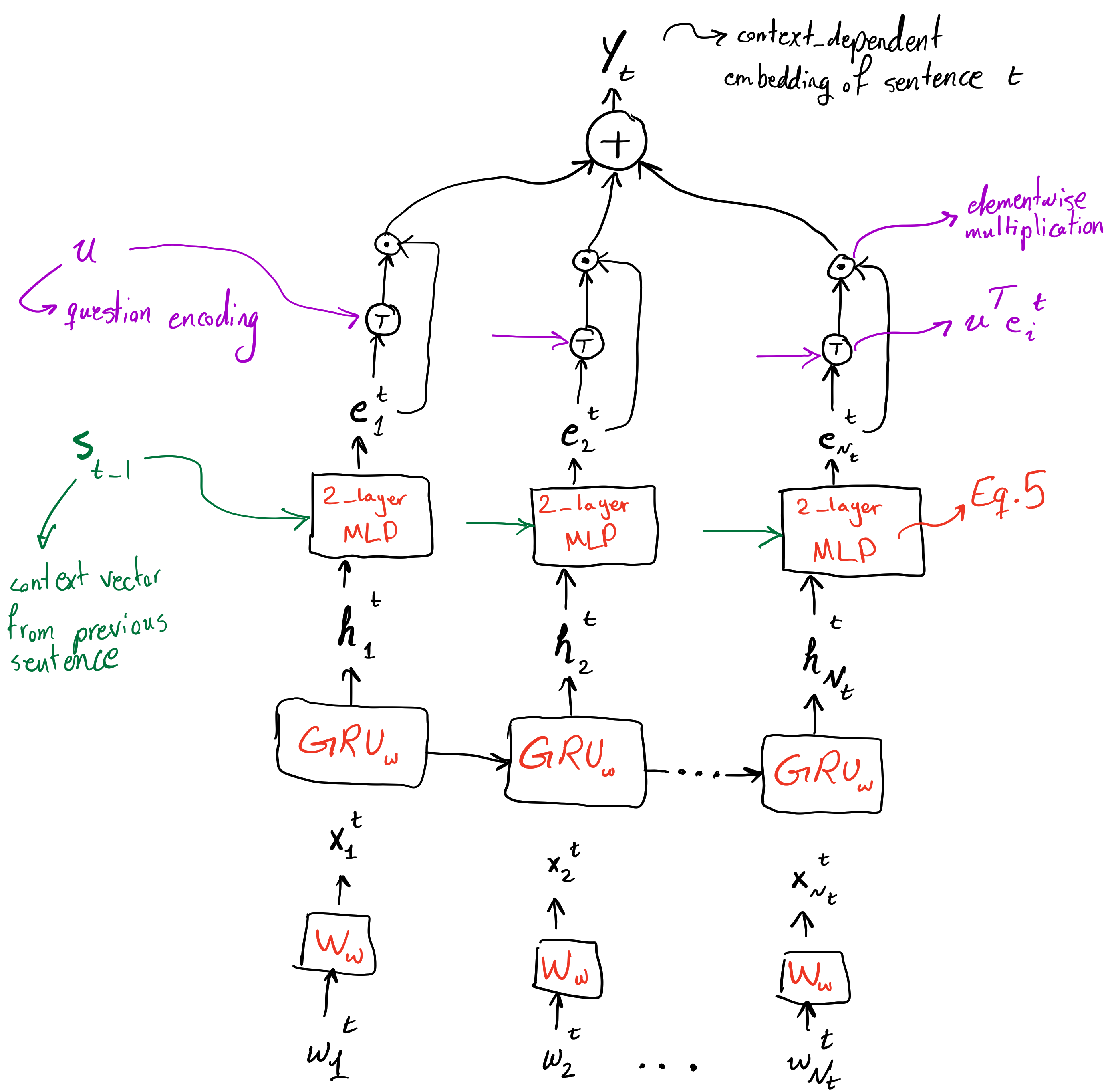 The diagram above is the missing figure from the paper! Well, just kidding. Figure 2 from paper is quite informative. This is just a supplementary diagram to make things more clear.

A question that comes to mind is why this attention mechanism isn't incorporated inside the GRU itself? Although the current architecture has allowed the model to have shared parameters in GRUs when encoding the question, input sentences, and the feedback sentence, but it would be interesting to see how the model would perform if attention was baked into the GRU, like the Attentional GRU in the DMN+[1] paper.

As clearly can be seen, this architecture is an extension of attention-less sequence to sequence models. It has the bottleneck vector representation $\mathbf{u} + \mathbf{m}$, which is used to condition the language model in the Answer Module. It doesn't have attention mechanism in the decoder, it only has the attention in the encoder portion of the architecture (similar to many VQA models). Although results are impressive (on the bAbI dataset), it would be interesting to see how this architecture (without the feedback mechanism) would fare against models that incorporate attention in their decoder.

They report that "training can be treated as a supervised classification problem" and they try "to minimize the cross-entropy error of the answer sequence and the supplementary question sequence". The evaluate their model on the bAbI dataset and a newly proposed ibAbI (interactive bAbI) dataset. They compare their models with DMN+[1], MemN2N[2], and a simple EncDec[3] model. Their model successfully manages to solve 19 out of 20 of the bAbI tasks (Table 4). They also get significantly better results on the ibAbI dataset compared to the other models evaluated.

The paper was interesting, although short of some details. They could also compare their models against an additional number of other models. It would also be great if they could provide an open source implementation of the proposed model. I still can't think of a way to implement the Input Module. If you have any suggestions comment below.